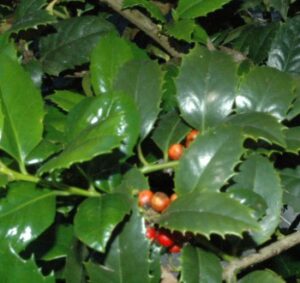 – Not native to North America, the Ilex Mary Nell is an all female cultivated hybrid cross between Ilex latifolia and ( Ilex cornuta x ilex pernyi)

– Mary Nell Holly trees will tolerate both full sun and full shade equally well in the North Florida | Jacksonville | St. Augustine area landscape. They will tend, like other Holly cultivar to have more berries with more sunny exposures.

– Mary Nell Holly has a deep dark almost olive like glossy green foliage that
is heavily spine along the margins of the leaf.

– Bark of the Mary Nell Holly is a light pale tan.

– Characteristics similar to most species of Holly trees, the Mary Nell Holly will prefer rich, slightly acidic well drained soils although they are widely tolerant of a range of soil conditions.

– Upright columnar growth habit and dense fully foliated branches, the Mary Nell Holly tree tends to be narrow taller than it is wide and gradually widening from top to bottom in a Christmas tree shape.

– Slow growth rate makes the Mary Nell Holly an easily managed landscape plant for accenting the foundation of a home or used as a hedge or privacy screen.

– Mary Nell Holly trees will be drought tolerant once established in the he
landscape.

– Mary Nell Holly’s are an easy maintenance option when a narrow landscape accent is needed due to lack vertical space.

– The Mary Nell Holly also makes a great landscape specimen tree that will require little effort on your part to maintain its beautiful form and lush foliage.

– Prune branch tips each winter for Christmas season decorations that will last for weeks, the more you prune for decorations, the prettier your holly tree will be next year!

-They will need good water during the establishment period and supplemental irrigation when attempting to add soil nutrients or after pruning to help flush new foliage.

– Fertilize each spring with a mixture of Milorganite or ‘Green Edge’ and a slow release poly coated plant food such as Osmocote Plus slow release plant food fertilizer plants or Stay Green general purpose plant food, sprinkling the fertilizer around on the mulch circle area underneath
the foliage of the tree.