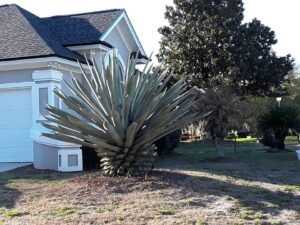 Native to Mexico, but naturalized in other arid areas of the world where it is cultivated for its medicinal and culinary uses. They can be propagated from pups or offsets near the base of the crown or basal rosette and from seeds.

Agave americana is an upright blue green agave that makes a strong
statement in the landscape. Give them plenty of room to grow as over time the blades can reach 6 ft long and each be as wide as 10 inches! It is best to locate them at least 6 ft off sidewalks, patios and pool deck areas where the plants sharp edges when mature would be unwelcome or in the way of traffic.

Although commonly called century plant, the life cycle from seed to bloom is said to take a very long time in dry arid climates. When the bloom stalk rises high above the foliage at 20+ feet it is quite the spectacular show. Once the seeds are formed from those blossoms, the agave that it grew from begins to die back to the ground where it is replaced within a month or two with new offshoots growing around the base of the agave that was there before. Those can be left in place and allowed to grow in a mass but are more often thinned to a single plant to replace the last one or transplanted to other locations in the garden.

Amazingly enough, here in our warm moist environment “century” plants
are frequently known to bloom in as little as 6-8 years!  That spectacular bloom display although still more of a rare site, doesn’t take a lifetime to see.

– Century Plants can be planted in a full sun or a partially shaded location in
the Northeast Florida | Jacksonville | St. Augustine area landscape. 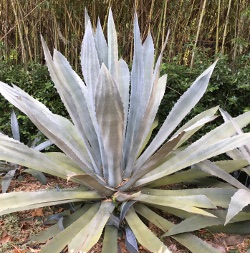 Century plants are one of my favorite plant choices for big bold texture that can be seen easily and attracts attention at a distance. The soft blue green foliage has just enough of a silvery hue to stand out from the crowd of green you see everywhere in the landscapes.

Perhaps my favorite part of the Agave americanas foliage is the patterning left on the leaf when it is being formed by neighboring foliage. As the foliage expands upward and outward from a tightly compressed central bud edges of the neighboring foliage are pressed into the leaf leaving an intriguing pattern that remains visible once the foliage has matured.

Century plants will prefer extremely well draining soils that are comprised mostly of sand. If you have clay soils or nice black dirt that grabs and holds water after rains here in Northeast Florida it would be a good idea to relegate your Agave plantings to raised bed areas and decorative
containers.

Expect your Agave americana plants to reach 4-6 feet high and wide when fully grown. Although considered to be slow growing, your Agave plants can still be quite large after 3 or 4 years in the landscape when planted from offshoots.

Allow your agave plants to go without water during the winter months to
strengthen their defense against a hard freeze.

Care of Agave americana in the Northeast Florida / Jacksonville and St. Augustine
Landscape: