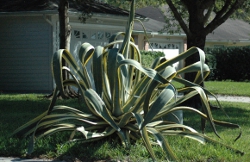 Native to Mexico, but naturalized in other arid areas of the world where it
is cultivated for its medicinal and culinary uses. Variegated Century plants can be propagated from pups or offsets near the base of the crown or basal rosette and from seeds.

Agave americana ‘Marginata’ is a green agave with wide marginal stripes
of creamy bright yellow along both sides of the leaves. Foliage of  the variegated century plant is characteristically twisted and folded back on themselves giving the plants a sense of life and movement in the landscape.

Give them plenty of room to grow as over time the blades can reach 6 ft long and each be as wide as 10 inches! It is best to locate them at least 6-8 ft off sidewalks, patios and pool deck areas where the plants sharp edges when mature would be unwelcome or in the way of traffic.

Agave americana ‘ Marginata’ tends to be a bit wider than it is tall as the foliage tends to turn in on itself going upward and  then back down, in addition the lower leaves tend to lie flat against the ground at the base of the plant extending its width outward.

Although commonly called century plant, the life cycle from seed to bloom is said to take a very long time in dry arid climates. When the bloom stalk rises high above the foliage at 20+ feet it is quite the spectacular show. Once the seeds are formed from those blossoms, the agave that it grew from begins to die back to the ground where it is replaced within a month or two with new offshoots growing around the base of the agave that was there before. Those can be left in place and allowed to grow in a mass but are more often thinned to a single plant to replace the last one or transplanted to other locations in the garden.

Amazingly enough, here in our warm moist environment “century” plants
are frequently known to bloom in as little as 6-8 years!  That spectacular bloom display although still more of a rare site, doesn’t take a lifetime to see.

– Variegated Century Plants can be planted in a full sun or a partially shaded
location in the Northeast Florida | Jacksonville | St. Augustine area landscape. 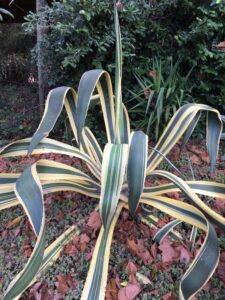 Variegated Century plants with their striking color contrast are an excellent choice for big bold texture and just the right amount of color to attract the eye in the landscape.

Perhaps my favorite part of the Variegated Century plant’s foliage is
the twists and turns that it will grow into and the sense of movement it creates on such a stiff and set in place landscape ornament is amazing.  It is often referred to as ribbons in garden books but to me it reminds me of a live ocean creature. I guess to each their own imagination, but that is what is so amazing about these plants, the fact that they catch our eye and capture our imagination!

Century plants will prefer extremely well draining soils that are comprised
mostly of sand. If you have clay soils or nice black dirt that grabs and holds water after rains here in Northeast Florida it would be a good idea to relegate your Agave plantings to raised bed areas and decorative containers.

Expect your Agave americana ‘Mediopicta’ plants to reach 4-6 feet high and 6-8 ft wide when fully grown. Although considered to be slow growing, your Agave plants can still be quite large after 4 or 5 years in the landscape when planted from offshoots.

Allow your agave plants to go un watered during the winter months to
strengthen their defense against a hard freeze.

– Fertilize each spring with a well balanced plant food like Osmocote.