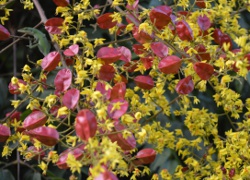 – Koelreuteria bipinnata is a species of Koelreuteria native to Asia, and
particularly to China. Grown for it’s beautiful golden yellow blossoms that fall off the tree in a shower of gold colored petals when the wind blows. This shower of petals is where the common name of the golden
rain tree comes from. If you are ever lucky enough to be nearby to one of these beauties on a blustery day in the fall, it is truly quite an experience!

The trees begin to bloom in late summer here in the Northeast Florida / Jacksonville and St. Augustine area landscapes. Blooms are quickly followed by the formation of beautiful bougainvillea like papery bracts (fruits) that change from deep reddish, to pink peach, and finally to a tan color. These capsules persist on the tree for quite a while during fall making a beautiful multicolored display. And of coarse, these multicolored papery bougainvillea like fruits are where the tree gets its second common name of a Chinese Flame tree.

In Northeast Florida these trees are a much welcome addition to the landscape for added fall color. We see so little foliage color change, the bright golden flowers and the color changing fruits that you can see from down the street are a delight to the eye!

Koelreuteria bipinnata is NOT on the Noxious weed list put out by the Florida Department of Agriculture and Consumer services, but still somehow seems to get confused with it’s close relative the Koelreuteria elegans, also commonly called Golden rain tree. Koelreuteria elegans is
listed as a category 2 invasive plant species for Central and Southern parts of Florida (not for the Northern portion of the state) That means it should be used with caution when planting in Central and South Florida. It has increased in abundance or frequency but has not yet altered Florida Plant Communities and may become category 1 invasives in central and south Florida if ecological damage is demonstrated. basically they are being evaluated for those areas and thought to be a potential risk.  Koelreuteria bipinnata can safely be used in North, Central and Southern parts of Florida as of the Florida Exotic Pest Plant Councils 2019 listing.

The two trees look very similar and are most easily differentiated by the fact that the Koelreuteria elegans remains semi evergreen and the Koelreuteria bipinnata is deciduous, it will loose all of its leaves come late November and December.

And if that wasn’t enough confusion for you there is a third player in the game with the same common names of Golden Rain Tree and Chinese Flame Tree and sometimes known as the Panicled Goldenrain tree. Koelreuteria paniculata is not on the invasive species list for North Central or South Florida and can be safely used in those areas without danger of encroachment into our local forested areas. Koelreuteria paniculata is also a deciduous selection like the bippinata it will loose all of its foliage in late December to January in our Northeast Florida landscape.

See the chart at the bottom to help visually sort the Koelreuterias.

– Deep green foliage of the Chinese Golden Rain tree is deciduous, meaning the tree will drop all of its leaves for winter. Leaves turn briefly yellow in fall here in Northeast Florida before the tree goes dormant for the winter.

I don’t usually go into depth on foliage but for this tree that is so often
confused with other species of its kind, that also grow in Florida, here is the technical breakdown on the leaves…

Koelreuteria bipinnata has twice compound (bipinnetely compound) and
alternate leaves, and I bet you’ll never guess what? That is where the tree gets its botanical name from! But you knew that already! Leaflets are ovate, oblong and from 2-4 inches in length.

– Young bark is smooth and a lighter brown color and begins to grey and
develops deeper furrows as the tree ages.

– Chinese Flame trees can reach sizes of 40-60 feet H | 20-35+ feet Wide and are usually seen at ranges closer to 20-35 feet in height and width in the Northeast Florida Landscape.

– More upright branch structure than others, wider than tall , branch structure and growth is quirky when young but trees will quickly fill in to a nice full mushroom shape when planted out into the landscape.

– Fast growing tree here in the Northeast Florida area. You can expect 2 feet
or more in growth each growing season when young. And 1-2 feet each year as the trees mature. 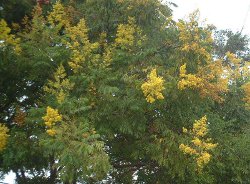 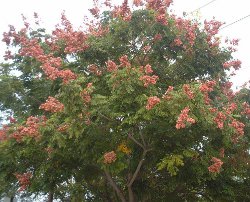 – Water well after planting during the establishment period. Little
supplemental irrigation is needed after the first few months once the tree has resumed active growth after being planted from the S & J Nursery container.

– Often used as the centerpiece in the landscape

where the blooms and seed capsules can be appreciated.

– Water every day during the establishment period. See watering your newly planted
trees for more information.

– Prune dead or weakened branches each summer for the first few years as needed
making sure to space branches evenly on trunk and choose permanent branches with a nice wide angle and no
included bark.

– When growing in the gardens landscape provide a 1 ft diameter circle of mulched
area where grass is kept from growing for each inch of caliper (or diameter) of trunk measured 4 inches from the
ground level.

– Fertilize each spring with a mixture of Milorganite and a slow release poly coated
plant food such as Osmocote or Stay Green general purpose plant food, sprinkling the fertilizer around the mulch
circle underneath the foliage of the tree