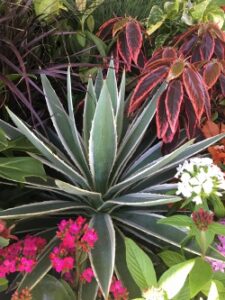 Native to Mexico and Central America, but naturalized in other arid areas of
the world where it is cultivated for its use in the making of the alcoholic drink known as Mezcal. They can be propagated from pups or offsets near  he base of the plant and from bulbils or seed.

The variegated form ‘Marginata’ , as I’m sure you could tell from the
name, has a soft almost pastel or pale sage green leaf that is beautifully edged with a creamy white variegation on the leaf edges.

Although commonly called a thin leaf century plant, the life cycle from seed to bloom is said to take a very long time in dry arid climates. Here in our warm moist semitropical climate zone in Northeast Florida , they can bloom much sooner in as little as 6-10 years. When the bloom stalk rises high above the foliage at 8-10 feet it is quite the spectacular show. What I find
interesting about the flowering stalk of Agave angustifolia is the bulbils that form on the flower stalk as it blooms and forms seeds. These bulbils will fall to the ground and given the right conditions a new plant will grow.

– Caribbean Agave plants can be planted in a full sun or a partially
shaded location in the Northeast Florida | Jacksonville | St. Augustine area landscape.

Strongly upright form with stiff straight variegated foliage. One of my
favorite Agave selections, I’m a sucker for some pin striping on a plant, I love variegated foliage. For some reason, Agave attenuata reminds me of a big sea urchin, I know, enough with the imagination! maybe its the overall rounded symmetrical look of the plant. Anyway….

Caribbean Agave foliage reaches 2-4 ft high and wide and has a pretty sharp tip on each of those thin leaves that can be cut off to make it a bit more child/ pet friendly than the garden porcupine it resembles. I know, I said I would quit with the imagination. Apparently I lied. 🙂

Century plants will prefer extremely well draining soils that are comprised mostly of sand. If you have clay soils or nice black dirt that grabs and holds water after rains here in Northeast Florida it would be a good idea to relegate your Agave plantings to raised bed areas and decorative
containers.

Allow your agave plants to go without water during the winter months to
strengthen their defense against a hard freeze.

Care of Agave angustifolia ‘Marginata’ in the 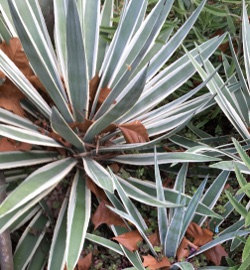 -Fertilize each spring with a well balanced plant food like Osmocote.