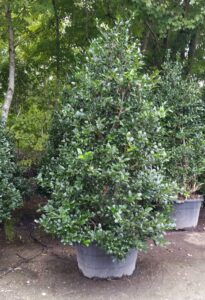 – Nellie R. Stevens Hollys have a deep dark green glossy foliage that will be a
stand out in the landscape.

– Bark of the Nellie R. Stevens Holly is rarely viewed in the landscape
due to its full lushly foliated growth habit, usually seen growing full to the ground, but is a light tan in color.

– Salt tolerance unknown, although they are seen growing in areas within a few blocks of the ocean rather well.

– Upright columnar growth habit, the Nellie R. Stevens Holly tends to be
narrow taller than it is wide and gradually widening from top to bottom in a Christmas tree shape.

– Slow growth rate makes the Nellie Stevens Holly an easily managed
landscape plant for accenting the foundation of a home or used as a hedge or privacy screen. 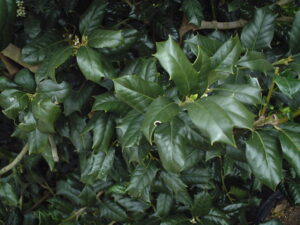 – Nellie Stevens Hollys are all female and will need a pollinator to ensure a lush crop of berries each year. Fortunately any Ilex cornuta will do since they flower at similar times, members of ilex cornuta (Chinese Holly ) include dwarf burford and burfordii holly as well as carissa and needlepoint, all of which are widely used landscape plants in the North Florida | Jacksonville | St. Augustine area landscape. Finding one of these plants growing in the general vicinity is almost a given even in the newest
of developments.

– Nellie R. Stevens Hollys are an easy maintenance option when a narrower
landscape accent is needed due to lack vertical space. The mature height makes this plant ideal for two story houses where additional height would be a welcome characteristic.

– Nellie Stevens Holly makes a beautiful two story privacy screen that will
require little if any maintenance once established in the landscape.

–  Hollys are a decorators dream each Christmas season with its deep glossy
green foliage with its characteristic leaf shape and bright glossy red berries! Prune to your hearts content for long lasting cut foliage to decorate Christmas tables and wreaths, the more you prune for decorations, the
prettier your holly tree will be next year!

-They will need good water during the establishment period and supplemental irrigation when attempting to fix soil nutrient deficiencies or after pruning to help flush new foliage.

– Nellie Stevens Hollys tend to do better long term when pruned to a single
leader instead of having multiple trunks, prune out competing branches as low as possible towards the base of the tree and allow a central leader to develop.

– Fertilize each spring with a mixture of Milorganite and a slow release poly coated plant food such as Osmocote for Acid loving plants or Stay Green general purpose plant food, sprinkling the fertilizer around the mulch circle
underneath the foliage of the tree.