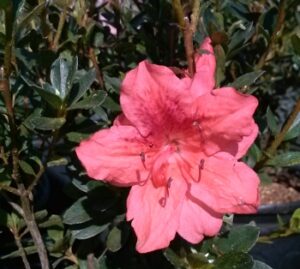 Over the years we here at S & J Tree Farm and Nursery have carried allot of different varieties of Azaleas. As new introductions come out they are tried and evaluated in the local landscapes and eventually accepted as a landscape staple or edged out by other cultivars with superior landscape performance.

With over three hundred named varieties of Azaleas available , not to mention the wide array of colors and mature sizes within those available selections, it can get a bit overwhelming when it comes
time to deciding what Azalea suits your specific gardens needs.

Knowing what to expect once planted so that you can get the right selection of Azalea for the right space as well as how to properly care for them as they grow will ensure that your Azaleas continue to thrive
exactly the way you wanted them to.

At S & J Nursery, we have carefully selected the best of the best North Florida Azaleas available for our area gardens. Whether your looking for a low growing accent plant for the entryway to your home
or a large growing privacy screen for a natural landscape barrier, we have an Azalea that is just right for you and It is our hope that you come to love north Florida’s Azaleas as much as we do!

It is probably the most common question out there for both native North Florida gardeners and Northern transplants finding themselves learning about Florida gardening. And if I have heard it once I have heard
it a thousand times… Do you have any Rhododendrons? Do Rhododendrons grow here? What’s the difference in Rhododendrons and Azaleas? I thought you said you have Rhododendrons these say Azaleas?  The answer is simpler than you  might think, so let me attempt to answer these in a way that will make, hopefully, at least a little bit of sense. Maybe 🙂  ….

Rhododendrons in general are able to be grown in the “Upper and Middle South” portions of the United States. There are a just a very few heat tolerant varieties of Rhododendron that will live in what is
considered to be the “Lower South”. Here in North Florida in the Jacksonville | St. Augustine Florida area we are
in what is considered to be the “Coastal South” Where we have high rain fall, moderate winter temperatures and hot
humid summers.

Most people think of Azaleas and Rhododendrons as completely different plants but they both belong to the genus ( family ) …Rhododendron. So in the botanical name of each azalea selection you see
Rhododendron ….then further classifications to name the selection.

Rhododendrons and Azaleas have exactly the same requirements when it comes to soil, sun, water, and fertilizer needs.

What makes an Azalea and Azalea instead of just a Rhododendron boils down to a few basic things.

So to sum it all up… A Rhododendron by any other name, (Azalea) is still a Rhododendron. But here in North Florida when you ask about the beautiful Rhododendron bushes we are gonna look at you funny, because
to us those are Azaleas, and Rhododendrons don’t grow here.