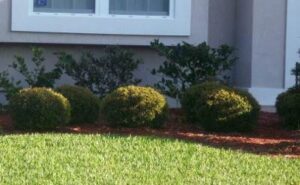 – Schilling’s Dwarf Holly is a selection of the native ilex vomitoria Youpon Holly that grows along the coastal regions of the Atlantic.

– Schilling’s Dwarf Holly can reach sizes of 4-6+ feet High | 6+ feet Wide but is easily maintained as low as 2 – 3 ft with pruning. This shrub reesponds well to heavy shearing and is often used as a bonsai plant.

– Schilling’s Dwarf Holly has a rounded habit growing wider than tall and tends to lend its use best to a round or mushroom shape.

– Schilling’s Dwarf Holly is a slow growing landscape selection, it may require a little patience to get it to the size you would like it to be in the landscape but its low maintenance habit as well as showy winter berries make it worth the wait.

-Clusters of small white flowers tend to not be very showy and appear on the plant each spring, no berries. 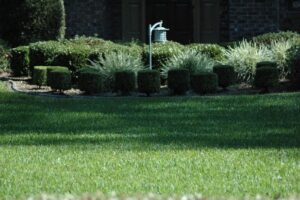 – Schilling’s Dwarf Holly is drought tolerant once established into the landscape and requires very little attention to watering except when first being planted from the nursery containers into the landscape, especially during North Florida | Jacksonville | St. Augustine area’s hot summer months.

– Burfordii Hollys are an ideal planting for areas that will receive little to no
supplemental irrigation.

– Does not tend to attract wildlife.

–  Schilling’s Dwarf Holly is often used in masses as a low growing
groundcover planted 3 ft from center to center. 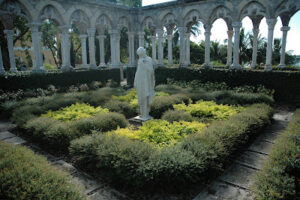 – Low maintenance and water requirements make this shrub ideal for a low maintenance landscape or xeroscape for home or commercial applications.

– Shrubs can be planted in the North Florida | Jacksonville | St. Augustine area at any time during the year. In normal and well draining soils dig the hole as deep as the root ball and two to three times as wide. Plant the top of the root ball level or slightly higher than the surrounding soils. When
planting in poorly drained soils make sure to plant your shrubs a minimum of 3 inches ABOVE the surrounding soil level.

– If planting larger shrubs you may need to extend the initial care a bit longer to protect your investment and get your shrubs off to the best start possible. 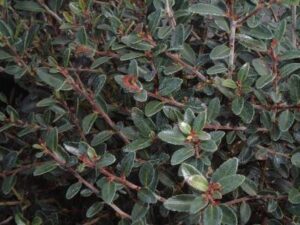 as possible pulling loose roots away from the root ball before installing your new plants, if the roots are to tight to easily loosen with your hands use a knife to cut a few slits into the root ball being careful to go all
the way from the top to the bottom and making the cut at least an inch deep. This will ensure that your plant will immediately begin to form new roots into its new surrounding soil.

– Fertilize each spring with a mixture of Milorganite and a slow release poly coated plant food such as Osmocote or Stay Green general purpose plant food, sprinkling the fertilizer around the mulch circle underneath the foliage of the tree

– Prune as needed to shape each spring and or summer.