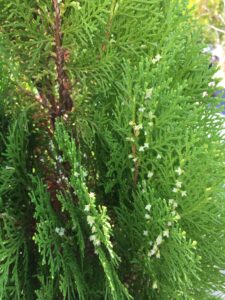 This page is being kept for informational purposes only as we are not currently growing this selection.

– Arborvitae ‘Blue Cone’ is a selection of Platycladus orientalis grown for
their beautiful blue green scales as well as their densely columnar growth habit.

Very pretty selection from the Cypress plant family that is native to China, Korea and Russia.

Often you will see them referred to on plant labels and in older publications as thuja although they are no longer considered the same plant I have included their previous classification as a synonym in the page heading to help avoid confusion. Botanically they differ from thuja in their nearly
scentless foliage, wingless seed and differing cones.

– Plant your Arborvitae / Blue Cone into a full sun or partially shaded
location here in Jacksonville, St. Augustine or other areas of the Northeast Florida landscape.

– The trees bark is a beautiful red brown color

– Arborvitae ‘Blue Cone’ / Platycladus
orientalis ‘Blue Cone’  is tolerant of a wide range of soil components, acidic , sandy dry soils, loam, alkaline, etc. as long as the soils are well draining and do not hold standing water after heavy rains.

– Here in the Northeast Florida landscape, Arborvitae ‘Blue Cone’ / Platycladus orientalis ‘Blue Cone’ can grow to 15-20 feet in height with up to a 10-15 ft spread.

– Moderate growing trees capable of adding approximately 1ft to their height in a single growing season.

– Drought tolerant once established into the landscape from your S & J
Nursery container.

– The dense evergreen foliage of the Arborvitae Blue Cone makes a thick privacy screen to block out neighboring houses or unsightly views.

– Can be used as a windscreen or where a more narrow or columnar cedar may be needed.

– Fertilize each spring with a slow release poly coated plant food such as
Osmocote or Stay Green general purpose plant food, sprinkling the fertilizer around the mulch circle underneath the foliage of the tree

– Arborvitae do not respond well to pruning as the majority of their foliage is towards the branch tips. Make sure to select your type of Aroborvitae to match your particular needs and keep in mind the mature spread of the tree you select. For Arborvitae Blue Cone you would need to plant them as far as 7-8 ft from th home foundation / fenceline / driveway / patio etc. as they reach as wide as 15 feet when mature.

Removing lower branches for clearance under and around your arborvitae can be done as it grows to expose the trunk underneath the foliage of the tree.