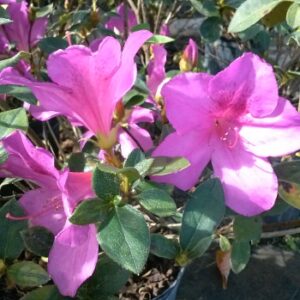 – Most Azaleas found in modern nursery sites are evergreen members of the Rhododendron family and are native to Asia, but North Florida is the native home to a few deciduous Azaleas with
somewhat gently fragrant blossoms.

– The Lavender Formosa Azalea is part of a grouping of Azaleas known as Southern Indicas ( a selection from Belgian Indica Hybrids) and are among the best selections for Azaleas that will get a little more sunlight in the North Florida | Jacksonville | St. Augustine areas gardens.

– Southern Indica Azaleas including the Lavender Formosa can be planted in partial sun or shaded conditions.

– Large evergreen foliage is a deep dark green color and looks its best when trimmed or pinched back each year following the spring bloom.

– Lavender Formosa Azalea’s will prefer fertilize, well drained soils that are
acidic ( from 4.5 – 6.0 on the PH scale ) Iron chlorosis will become problematic when planted in Alkaline soils.

– Lavender Formosa Azalea can reach sizes of 6-8+ feet High | 4-6 feet Wide but are most often kept to about 4 ft with annual or semi annual pruning.

– Azalea Formosa shrubs will need to be pinched and shaped a bit to keep them at their best in the landscape. Unpruned the have a naturally open rounded habit but are more thinly foliated than their manicured counterparts.

– Fast growing shrub quickly establishes itself into the landscape.

– Large bright almost neon lavender colored blooms cover the foliage of the plant each spring with a flower display you cant help but notice, eve from a distance these plants in bloom are spectacular!

– Attracts butterflies an other pollinators to the garden.

– Azaleas are among the most common landscape shrubs for the North Florida area. They can be used as foundation plantings,   mass plantings in large beds, trained to single or multiple stemmed tree form
and used as foundation accents or focal points.

– Azaleas should be pruned each year after flowering to maintain the best
foliage and shape possible. They may be trimmed at any time during the summer months but remember not to trim to late in the season or you may be cutting off next years blooms! A good rule of thumb for the North Florida are is not to prune in the fall, wait until they have bloomed the following spring and trim once after spring and once in the summer.

– Azalea shrubs will need acid plant food made for Azaleas for best
results.

– Azalea shrubs can be planted in the North Florida | Jacksonville | St. Augustine area at any time during the year. In normal and well draining soils dig the hole as deep as the root ball and two to three times as wide. Plant the top of the root ball level or slightly higher than the surrounding soils. Avoid planting in poorly drained soils.

– Fertilize each spring with a mixture of Milorganite and a good acid fertilizer made specifically for acid plants like azaleas camellias and gardenias. Be sure when fertilizing to sprinkle the fertilizer around the mulch circle underneath the foliage of the shrubs.