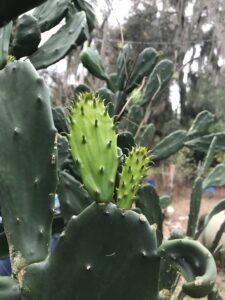 Prickly Pear Cactus is native to the Americas. Mexico, the Carribean Islands, and much of the dryer desert areas of the United States. There are 9 species of native Optunia that can be found growing in Florida.  The spiness Prickly pear is a selection thought to be a mutation of the Optunia Species that has been passed along and cultivated for it’s friendlier foliage. Don’t let
that lack of thorns make you complacent, a nice thick pair of leather gloves and a pair of tongs is still the best way to harvest fruits and pads of even the spineless prickly pear plant. Most Optunia would have large spines coming out of each raised bump on the pads as well as the smaller hidden
glochids, spineless prickly pear is missing those larger thorns that warn us to stay away but still retains it’s tiny fiber hairs that are the hidden defense against invaders called glochids.

With their unique architectural growth habits, pretty flowers, salt
tolerance,edible pads and ornamental fruits they are the picture of garden vesatility. Spineless prickly pear is just as at home in a garden perennial bed amongst the flowers as they are the edible landscape or in a rock garden.

– Plant in a full sun or a partially shaded location in the Northeast
Florida | Jacksonville | St. Augustine area landscape. 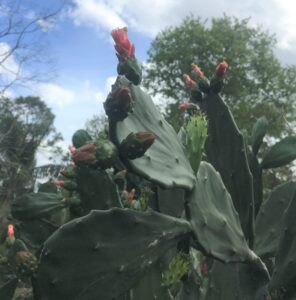 Foliage and Growth Habit and Mature Size of the Spineless Prickly Pear
Cactus:

Bright green new growth with soft thorn like projections grows into large 4-6 inch wide pads that are 6-8 inches long on average.  Each pad is covered on both sides by elevated bumps called areoles, it is these areoles where you will find thorns and or glochids of the optunia cactus plants. The cactus pads for us serve much the purpose of leaves in their ornamental value but interestingly enough are technically modified stem segments. Most cactus do have leaves but like on the Optunia Spp. they are inconspicuous.

The stem segments or pads break off and build on one another to form an
interestingly architectural display that can reach heights of 6-10 feet High and 6 feet wide.

Cactus are extremely drought tolerant as their foliage is a water storage unit for the plant allowing it to survive periods of extreme drought unharmed.

Allow your Spineless Prickly Pear plants to go unwatered during the
winter months to strengthen their defense against a hard freeze.

– Plant into well drained soil that does not stay moist or wet long after
rains. In frequently moist or water logged soils consider building up a of sandy soil at least 6 inches above grade and two to three feet wide to plant your Prickly Pear Cactus in.

– Prickly Pear Cactus make great container plantings as containers
tend to dry out quickly even with daily rains. Consider planting in a decorative container with drain holes that can be planted into the ground with a minimum of one third to one half of the pot left above the
existing soil level.

– Mulch heavily to reduce weed growth under the foliage.