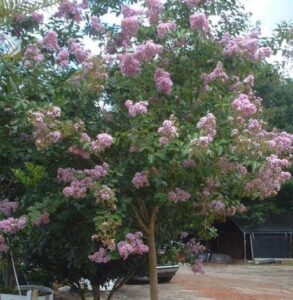 – Full sun is needed for Muskogee Crape Myrtles to grow and bloom properly.

– Large green deciduous foliage of the Muskogee Crape Myrtle turns red in the fall
before falling off the tree for winter.

– Bark of the Muskogee Crape Myrtle is a beautiful mottled brown and tan color and smooth textured. Very Pretty.

– Muskogee Crape Myrtles do well in most soils providing they are well draining.

– Crape Myrtle Muskogee is one of the larger growing selections and can grow up to 25 feet high and wide. Use Muskogee when you have plenty of space to let it grow to its full potential, stunning against a two story backdrop or as a stand alone shade tree specimen in smaller yard areas.

– Upright spreading tree will maintain a vase like shape when young or pruned heavily and gradually round out when allowed to naturally mature. 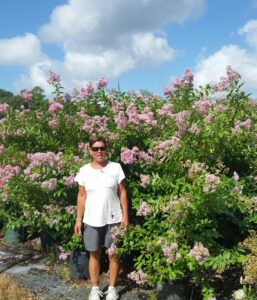 – Muskogee Crape Myrtle blooms have been described to me by homeowners in different ways,  I often have people requesting the  pink flowering Crape Myrtle and show them the Pink Sioux, nope not it! Then I show them the lavender Muskogee and we find what they were looking for.  Muskogee blooms when they are young are a very pale pastel lavender and as they age turn into an almost translucent pink. They get so tall so quickly you’ll find yourself looking up at them towards the sun trying to decide it that is a pink bloom or a lavender bloom or is it a pinkish lavender, or maybe a lavender-ish pink? Well its named pretty much everywhere as a light lavender and depending on when you took the photo , the blooms can look either color. Either way you see it, Muskogees soft hues are soothing to the eye and beautiful from up close and down the street.

– Crape Myrtles trees are drought tolerant after they are established in the
landscape but will need to be watered well after planting for two weeks to three months in the establishment period depending on the size of the tree being planted and during prolonged periods of drought after established
in the landscape.

– Few trees make quite the statement in the landscape that a Crape Myrtle can. They bloom for months with little care on our part to keep them looking spectacular. Its little wonder they hold such a place in our hearts and in our gardens.

– Plant them alone as a specimen accent or in groups for added dramatic flare. With so many varieties, colors and sizes to choose from, no southern garden should be without at least one!

– Crape Myrtles are the perfect touch of color when inter planted in hedge rows for privacy screens or property borders.

-They will need good water during the establishment period and supplemental irrigation during dry spells or particularly hot dry summers.

– All Crape Myrtles bloom on new wood and should be pruned in winter or early spring for best bloom.

– Take care to remove basal suckers and small twiggy growth each year on larger specimens and remove crossing or touching branch growth as well as branches growing towards the center rather than the more desirable growth that grows out and away from other branches.

– During the summer growth season you can choose to trim old blooms and your Crape Myrtle will put out a second lighter and slightly smaller bloom to replace it and prolong your bloom season.

– Fertilize each spring with a heaping shovel of compost or a mixture of Milorganite and a slow release poly coated plant food such as Osmocote or Stay Green general purpose plant food, sprinkling the fertilizer around the mulch circle underneath the foliage of the tree.